An Interview With Co-Chair, Julie Paterson 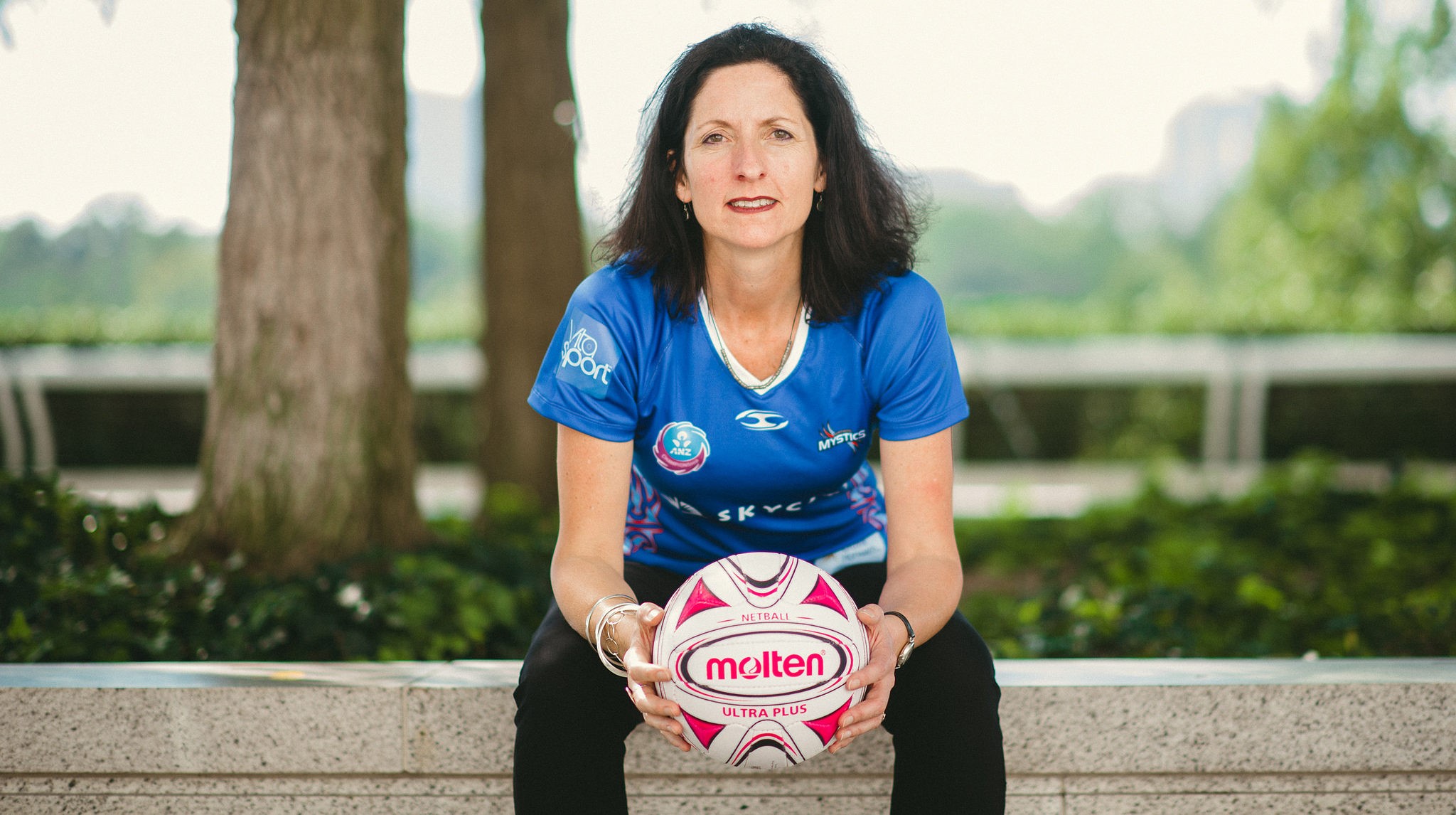 Deputy Editor of Coaching Perspectives, Sue Stockdale, recently interviewed Julie Paterson, co-Chair of Women in Sport Aotearoa and CEO of Tennis New Zealand, and the role that sport can play in society.

YOU HAVE TO SEE IT TO BE IT

Tennis legend Billie Jean King once said ‘You have to see it to be it’ (1), emphasising how important it is for girls to be inspired by seeing other women and girls participate in sport.

Julie Paterson had this experience. She was working as CEO of Netball Northern Zone in New Zealand, often with clubs in low socio-economic areas and mainly with Māori and Pacifica populations. She saw girls come through the ranks, get the opportunity to join franchise teams and start to get paid to play to their talents.

‘This gave these girls a chance to fully live,’ recalls Paterson. ‘I find that it’s opportunities to add value to communities, to do something that has a positive impact on people’s lives, that really drives me in sport.’

Paterson didn’t get into sports administration through the traditional pathway – through the ranks of playing the sport itself. Perhaps because of this, she brings a degree of objectivity to her leadership. As a youngster, Julie played netball but became more interested in making sure that sports were run efficiently. Making a shift from her developing career in tourism, she took on a role as CEO of Netball Southland and Southern Steel, leading both the professional team as well as community netball development and support.

As Paterson’s career blossomed, in 2012 she moved up to New Zealand’s North Island to take on the role of CEO of Netball Northern Zone, handling an annual operating budget of $2.5 million and nine full-time staff. In 2015 she gained a place on the Global Sports Mentoring Programme, a one-month programme set up through a partnership between the US Department of State, espnW and the University of Tennessee. The focus is on women’s empowerment, pairing emerging female leaders from around the world with female senior executives at leading US sports organisations. This experience would profoundly change Paterson’s approach to leadership and connect Julie to her higher purpose. ‘I went over there without any clear idea of how to turn the thoughts that were swirling in my head about women’s sport into something tangible,’ recalls Paterson.

‘As the programme went on, I spent a lot of time with the Women’s Sport Foundation, a US organisation founded in 1974 by Billie Jean King dedicated to creating leaders by ensuring girls have access to sports. I realised we had nothing like that back in New Zealand. Perhaps if we created something like that as an advocacy organisation it could make a positive impact.’

At the end of the month, Paterson stood up in front of her peers on the programme, presented her strategy and talked about how she planned to achieve it. The realisation then hit that she had a huge responsibility to go back to New Zealand and deliver on what she had committed to! The CEO of the Women’s Sport Foundation advised Paterson that it would be vital to find a research partner to provide data to help her advocate for change. Serendipitously, Professor Sarah Leberman from Massey University, based in New Zealand, contacted Julie on the same day as this conversation.

Leberman is a leader in the field of sport management, helped establish Massey University’s academic programme, and has conducted a lot of research into women and leadership in sport and academia. They talked about Julie’s ideas and, as a result, Leberman became co-founder of Women in Sport Aotearoa. Since limited research data existed in New Zealand, Paterson says they initially used an EY report (2) published in the US into how sport is a major influence in helping women to advance their careers and a way to spread leadership messages. Sport helps people learn about leadership discipline, how to turn up on time and play by the rules, listen to the referee and play within boundaries. ‘All of these skills are also vital in today’s business world,’ comments Paterson. ‘So maybe forward-thinking organisations should encourage their future leaders to play sport together instead of embarking on a team building programme!’

Buoyed by her experience in the USA, Paterson came back with a clear focus and a greater level of confidence, and in May 2017 – shortly after Women in Sport Aotearoa was launched – Paterson was appointed as CEO of Tennis New Zealand, and is now leading a team of fourteen people. This was a chance to utilise more of the leadership learnings from the mentor programme, particularly at a strategic level.

One of her first tasks was to draft a strategic plan. With the consultation work already begun prior to her appointment, Julie’s priority was to make sure that all those involved in tennis were clear of their roles and responsibilities and knew where they fitted in to the overall mission, rather than, as was sometimes the case, operating independently of the national body. She explains: ‘I had to get people aligned and acknowledging that what we were developing was not a Tennis New Zealand strategy: it was a tennis in New Zealand strategic framework, in which everyone had a part to play. Some of the feedback we had got through the consultation process was that people wanted Tennis New Zealand to show much stronger leadership, which is what resulted in the strategy we have now.’ Paterson expands to make the point: ‘I’ve seen a number of sports in New Zealand get into trouble because they focus too much on the sport and forget about the business. Moving from netball into tennis has meant I brought different insights. For example, netball is a team sport, and largely volunteer driven, compared to tennis that is an individual sport and mostly involves professional coaches. I’ve been able to shake the tree and challenge some of the traditional thinking in tennis, to explore why we do things. I can ask, “Why do we do it like this?”, “Is that right?” Fresh thinking can be a real asset.’

Listening to Paterson, it struck me that she is acting as an internal coach for the organisation: she makes no assumptions, asks questions and keeps an open mind. In many ways the skill of leadership is as much about remaining objective as it is about guiding an organisation towards achieving its mission or purpose.

So how does coaching play a role within sports administration? Although not consistently embedded as a leadership behaviour across the sport, Paterson thinks the concept of continuous education is taking hold. ‘I believe that in Tennis New Zealand we’ve got a very clear understanding around this now,’ she says. ‘Previously we struggled with some of the coaches who do not belong to national programmes and tend to do their own thing. We’ve tried to engage clubs to help them understand that they should contract a coach who is going to deliver what the people in the community want, rather than having the coach decide what is going to be delivered. That means educating the clubs about what people want. It’s about getting people – the customers – at the centre of the conversation and focusing on what they want to achieve.’

One of the ways that sport can influence wellbeing in the community is to keep teenagers engaged. Research shows that girls drop out of sport in significant numbers between the ages of 11 and 183, so Tennis New Zealand is now targeting teenage girls with a scheme called Cardio Tennis. Paterson explains that it’s just like tennis exercise but it’s not competitive. Instead, the girls use a tennis racket and a ball for aerobic exercises over a one-hour period with music and heart rate monitors, so it’s more about fun rather than competition – which can put some teenagers off.  Whether it’s in her role as CEO or as co-founder of Women in Sport Aotearoa, Paterson believes that sport has a vital role to play in society because it’s so visible.

‘We have the ability to influence using sport as a vehicle to deliver messages, such as health and wellbeing,’ she says. ‘Sport has the ability to go from government level to deep into the community and it’s a vehicle to change people’s perceptions.’  That was certainly what happened to Paterson as a result of going to USA for the mentoring programme. She came back with changed perceptions about what’s possible, and has taken steps to make it happen ever since. Paterson had to see it to become it!

This article has been republished with permission of the Association for Coaching.  https://www.associationforcoaching.com/page/CoachPersectiveUpdat

ABOUT: Sue Stockdale has represented Scotland in athletics and was the first UK woman to ski to the Magnetic North Pole. She is a Master Executive Coach and received a global coaching leadership award at the World Coaching Congress in Mumbai.  As an author, Sue has written several popular business books and is Deputy Editor of Coaching Perspectives.